You are probably like I was not too long ago. 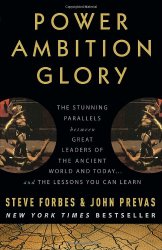 It wasn't until I read Power Ambition Glory by Steve Forbes and John Privas did I learn the details of this strong but well liked leader of his time. The book details the exploits of other great ancient leaders such as Alexander the Great, Hannibal and of course Augustus among others.

Augustus took Rome from the brink of civil war and hedonism and established a strong constitutional system of laws that helped guide the Roman Empire for centuries after his death. He knew from his great Uncle Julius Caesar and from history of leaders before him like Alexander The Great. That constant conquest, an unchecked ego and lack of regard of administering your land and people can bring a great superpower to its knees.

He was not a born leader or politician he became one after Caesar left him his inheritance as Julius Caesar had no children. He learned the system how to fight and scheme to come into power. However once he became the leader and created peace across the Roman Empire, endowing him with all the riches and honors he conferred. Augustus remained a simple man, living an almost stoic lifestyle. Wore simple clothes lived in a normal house talked plainly and freely with senators and the working class alike. Even though he was worshipped as a god in Asia (As he did not allow worship of him in Italy) He kept a rational sound mind. He could get away with anything but he had a strong sense of justice and morals turning a corrupt and disoriented Rome into a transparent government and promoted family values among his people.

To stay grounded, he made a law that as an Emperor or general is roaming around on his chariot during a Roman Triumph receiving applause and honor  a person there to whisper into his ear " remember you are a man, not a god".

This is the Leader America needs today. The power hungry dishonest narcissists have been in control for too long. Many presidents have come along in the past couple of decades that think they are above the law and can do whatever they want thinking themselves as Kings.

What would Augustus think of this Despotism? Even him declared as a God and Father of the Country in Rome knew even himself is not exempt from the rule of law. A reformer is needed not to inject new laws but to follow the old ones, the ones put in place by Rome and Greece originally, then designed by the Founding Fathers of America in the Constitution, they learned from Roman History how to manager a country from Augustus. Knowing that a firm laws are to be followed and pointless wars to be avoided.

Augustus not only taught us about good governing. He promoted a lifestyle that's as good for the person as it is for the nation. He knew-excessive displays of wealth, intoxication, adultery, fornication lead to a distorted view of life and can morally corrupt a nation. Sound familiar? Look around you.

He promoted the simple lifestyle of the traditional Romans, be healthy, be honest, get married and have kids. However much as today as it was in his time. Culture has swung in the direction of hedonism. Now it's time for a new leader to move the pendulum back into balance.

Do not mistake me for saying that more strict moral laws should be created! This goes beyond law. Morality by law is not morality at all. It is a choice. However to have a leader that talks about this and actually lives himself can help influence our morally bankrupt society and instill good virtues in the younger generations to come.

Augustus did try to lawfully enforce morals and he did not always follow his teachings no ones perfect. Read the book I did or a biography of his and you can see for yourself his tremendous success with this way of governing and living

Posted by Ryan at 6:20 PM No comments: Links to this post

How Walking Can Help Increase Your Creativity

Walking can help unleash your creativity, help you solve problems and sort through your thoughts. Besides the many health benefits of walking, can be a relaxing format to study and dissect ones thoughts. Through many personal experiences of my own this has assisted me greatly. Just today I was out for stroll struggling to think of a subject to write about, and it suddenly hit me, as many things has done during my walks around my apartment complex.

How is this so? I can only speak for myself that it has to do with disconnecting with ones current problems, we can sometimes get so bogged down by many things such as a stress and daily life issues that may occur. Walking acts as a anecdote in this sense, taking us out of our offices, classrooms and allows our heads to breathe. A walk gets us out of our standard places, as we are interacting with the world new images, thoughts and ideas can pop into our heads, as long as we let it come.

For a writer or critical thinker this can get our creativity juices flowing once again, and can elevate ourselves to a different level of thought, new ideas and thoughts come to me in my walks sometimes more than others, but I can attribute many views and actions as a result of walking.

Walking can also increase one's motivation, I have always felt invigorated after a short walk makes me want to write, and significantly increases my mood and my outlook for the day.

Walking among other things, can help control your blood pressure, maintain weight and lowers your risk of stroke.

So much can be gained for the mind body and spirit even if you are not much of a fitness person, walking is free, simple, and can open your mind so why not give it a try? Theirs even more benefits of walking listed here.

Walking isn't the end all solution, but can be a great assistance to ourselves when we run out of ideas, writing prompts and free writing are also great alternatives.
Posted by Ryan at 3:12 PM

Since the success of my last weeks post, I figured I would continue the traditlion weekly, highlighting the new book reviews that I find on the web, here is this weeks list:

The Book Connection - "Hearts of Courage" by John Tippets : Review

Posted by Ryan at 1:12 PM No comments: Links to this post